On the instigation of the Town Clerk, Mr D Law and Mr James McCartney, a local businessman, a special meeting was held in the Town Hall on the 22nd of October 1925 to discuss the possibility of the formation of a Golf Club. Mr Charles Legg J.P. who was also Chairman of the Carrickfergus Urban District Council, in proposing that further enquiries be made into the formation of a Golf Club, received unanimous approval and this resulted in a further meeting being held on 12th February 1926, when it was unanimously agreed that a Golf Club be formed to be known as “The Carrickfergus Golf Club”, with Mr Charles Legg J.P. as President and Mr D Law (Town Clerk) as Hon. Secretary.

By this time, 74 gentlemen, 74 ladies and 10 associates had taken membership and the Annual Subscription was fixed at 2 guineas for men, one guinea for ladies and a half guinea for junior associates. A feature of this meeting was reported in the local newspaper as follows:- “Mr Francis Atkinson, renowned for his giant drives, swore fervently and emphatically to support the new club physically, financially and mentally – he would take a bill hook or spade and work for the club if it came to the bit and he would back it for all he was worth even if he should die in the Workhouse.” (Loud Applause). 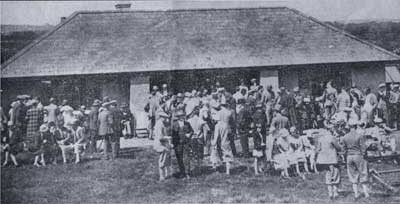 The first council worked diligently and successfully negotiated a five year lease at £150 per annum with James Taylor & Sons of Barn Mills, for four fields of 35 acres for the course and ½ an acre of what was known as the Quarry Field for the clubhouse. Mr G H Clarkson was engaged as Professional/Greenkeeper at a wage of 45/-d per week plus 5/-d travelling expenses and he was also allowed to charge tuition fees of 1/-d per half hour. An interesting minute reveals that a certain gentleman, who carried clubs for hire or reward, applied for membership but was considered ineligible on a ruling given by the Golf Union of Ireland. Caddy fees at that time were 5d for 9 holes or 9d for 18 holes. Work on the course progressed satisfactorily and at the first Annual General Meeting held on the 14th May 1926 the membership was stated as being 125 gentlemen, 140 ladies and 50 associates and juveniles. Mr A Miscampbell, a local prominent businessman, was elected the first Captain and Mr C Binnie, Headmaster of the Carrickfergus Technical College, the Hon. Treasurer. Naturally, the main focus was on the financing and building of a clubhouse and in this connection it was agreed to offer the membership Debenture Stock at £5 each, redeemable at £5.10.0 as and when club finances permitted – within a year £980 had been subscribed. 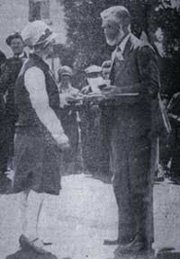 The ladies branch was also active and held their first General Meeting on the 22nd of June 1926, when Mrs E M Gransden was elected Lady Captain and Miss M Carrey Hon. Secretary.

The building of a combined clubhouse and Greenkeeper residence was completed by March 1927 at a net cost of £1050 – £105 having been recovered as a subsidy from the government. The contractor was John Laverty of Whitehead who presented the club with its first trophy – The Laverty Cup. During the course of the year, the club became affiliated to the G.U.I.

By May 1927 the course was completed and comprised 2 par 3 holes and 7 par 4 holes, totalling 2,420 yards and the G.U.I. allocated a standard scratch of 67. The official opening was held on Saturday 28th May 1927 when, in glorious sunshine and before a large gathering – which included Mr Hugh Kelly, President of the G.U.I., who in his speech made reference to the very difficult quarry hole. Mr C Legg, using a new driver presented to him by the Lady Captain, Mrs Gransden, executed a very fine drive amidst the applause of the spectators. The young boy, Bobby McCullough, who retrieved the ball was given a half guinea by Mr Legg.

This was followed by an exhibition 4-ball match between Major Thompson (Larne), Messrs. Graham and Madden (Knock) and W B Jamison (Portadown). Later, a mixed foursomes competition was held for members, after which the Captain and his wife entertained the members to tea. To mark the occasion Mrs Gransden presented the ladies section with the Gransden Cup.